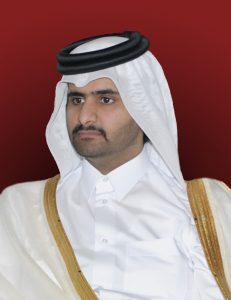 His Highness Sheikh Abdullah was born in Doha, Qatar on February 9, 1988 where he received his primary and secondary education. He later attended the Georgetown School of Foreign Service in Qatar, graduating in 2010 with a Bachelor of Science in Foreign Service.

In addition to his tasks as Deputy Amir, His Highness holds a number of positions including the General Supervisor of the Private Amiri Diwan, Chairman of the Board of Trustees of Qatar University, Vice Chairman of the Supreme Council for Economic Affairs and Investment, and Chairman of the Board of Directors of Sheikh Jassim bin Mohammed Bin Thani Social Welfare Foundation. He also supervises the Social and Sport Contribution Fund (Da’am).

Sheikh Abdullah Bin Hamad Al Thani was the Chief of the Amiri Diwan from 20 December 2011 to 10 November 2014.

On 4 November 2018, His Highness Deputy Amir was appointed as Chairman of the Board of Directors of QatarEnergy.

In addition to Arabic, he is fluent in English.