Qatar’s Shura Council was established in 1972, following the passing of the Amended Provisional Basic Law of Rule in the State of Qatar on 19 April 1972, to assist His Highness Sheikh Tamim bin Hamad Al Thani, Amir of the State of Qatar, and the Council of Ministers in the performance of their duties.

The Shura Council originally had 20 appointed members, a composition which has been subsequently amended on several occasions. The current Council sits 45 members.

In November 2020, His Highness the Amir announced that Shura Council elections would be taking place for the first time in 2021. This is part of Qatar’s ambition to develop its legislative process with wider citizen participation, reflecting the values of the Qatari Constitution and Qatar National Vision 2030.

The Council assumes the following functions in accordance with the Constitution:

The term of office of the Shura Council shall be four calendar years commencing from the date of the first meeting.

Appointments to the Shura Council

In realisation of the vision of HH the Amir, as announced in his speech at the opening of the 49th session of the Shura Council in 2020, the first legislative elections to pick members of the elected Shura Council took place on Saturday, 2 October 2021.

The voting process began at 8:00 am and continued until 6:00 pm. Qatari citizens were keen to show the spirit of responsible citizenship and fulfil the national duty of effective participation in this historic event, with 63.5% of the total registered voters casting their votes.

The results of the first Shura Council elections as approved by the elections committees are as follows:

The names of those appointed to the Shura Council by HH the Amir are as follows:

In accordance with Amiri Decree No. 37 of 2021, the country will be divided into 30 electoral districts, each of which will elect one representative. 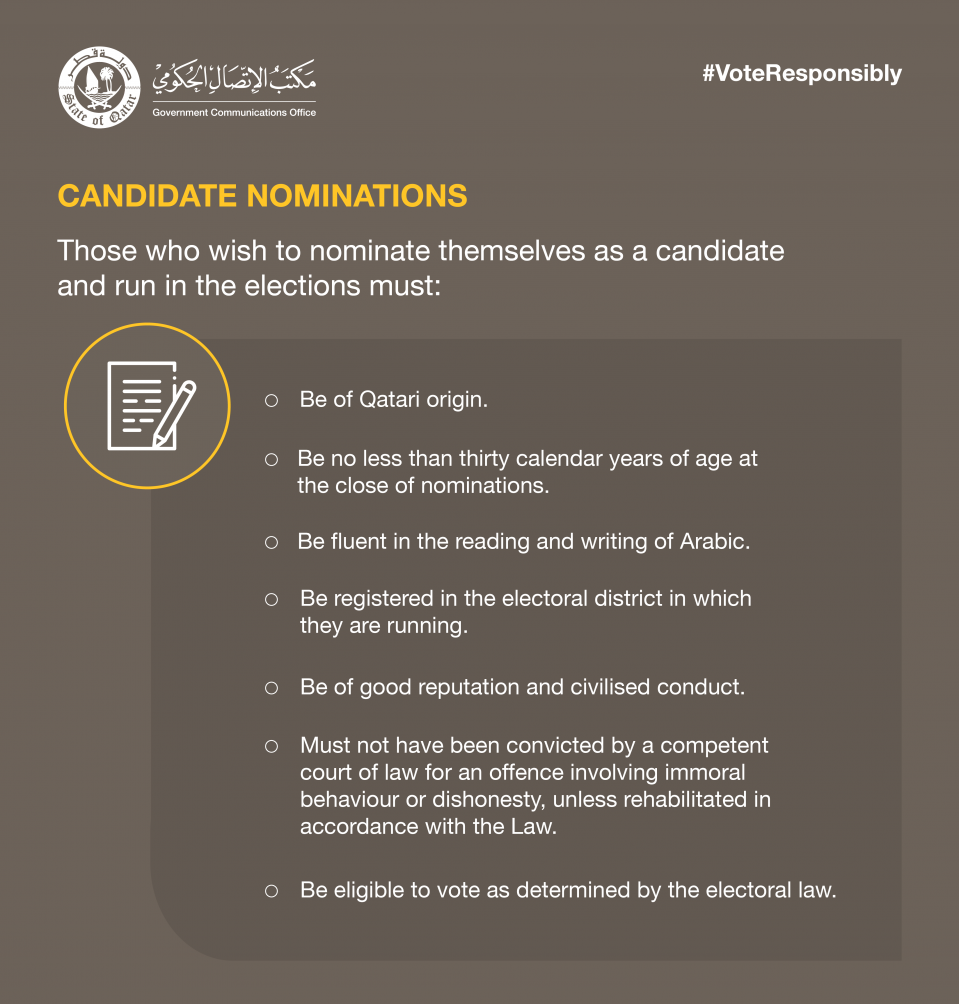 His Highness the Amir issued Decree No. 40 of 2021 setting 2 October 2021 as the date for electing members of the Shura Council.

The voting process will begin on Saturday, 2 October 2021. Polling stations will open their doors at 8:00 am and will continue working until 6:00 pm.

The names of elected members of the Shura Council will be announced on the evening of the election day (2 October 2021).

Election campaigning will begin following the announcement of the final list of candidates on Wednesday, 15 September 2021, and must end 24 hours prior to the start of the voting process on Friday, 1 October 2021.

The maximum expenditure of each candidate during their electoral campaign must not exceed two million Qatari riyals.

During the campaign, candidates must respect the constitution and the freedom of others to express their opinion. They must maintain national unity and community safety, and must not offend any other candidate. Candidates cannot incite tribal or sectarian strife among citizens and society in any way.

Timeline for the 2021 Shura Council elections