Qatar and the UN

Overview on Qatar’s partnership with the United Nations 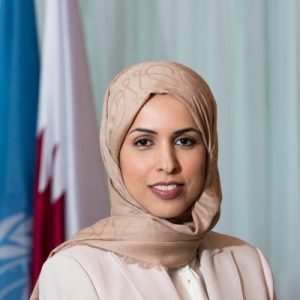 Qatar has been a member of the United Nations since 1971.

In the same year, The Permanent Mission of the State of Qatar to the United Nations in New York was created with the aim of representing Qatar and managing its relationship with the international organisation.

Qatar values its strategic partnership with the United Nations and has always worked towards achieving its goals, including maintaining international peace and security, supporting international development, promoting human rights, providing humanitarian assistance, and participating in collective action to address existing and emerging challenges facing the world.

Qatar’s commitment to the UN
Qatar has and continues to make generous financial contributions to various UN bodies and entities, aimed at supporting projects in the areas of development and humanitarian aid.

Exemplifying this, on the side-lines of the 2018 Doha Forum HE the Deputy Prime Minister and Minister of Foreign Affairs Sheikh Mohammed bin Abdulrahman Al Thani and HE the Secretary-General of the United Nations António Guterres signed several agreements demonstrating Qatar’s active role in achieving international peace, security and sustainable development.

The agreements included a $500 million (QAR 1.82 billion) pledge to various UN programmes and the establishment of four new UN offices in Doha. The agreement further pledged annual support to the UN Development Programme (UNDP), the UN Children’s Fund (UNICEF), the UN Relief and Works Agency for Palestine Refugees in the Near East (UNRWA), and the UN High Commissioner for Refugees.

Qatar is also committed to the development of sustainable programmes and initiatives, in alliance with the United Nations.

As of 9 September 2020, Education Above All Foundation (EAA) and its global partners UNICEF and UNESCO marked the first International Day to Protect Education from Attack. World leaders and activists addressed the need for immediate on-the-ground action to protect education from attack, declaring that silence over the deliberate killing of children in classrooms places decision-makers on the wrong side of history.

Established by UN General Assembly resolution (A/RES/74/275), following a call to action by Her Highness Sheikha Moza bint Nasser, Chairperson of EAA and UN Sustainable Development Goals Advocate, the International Day is a global platform for decision-makers to focus on safeguarding education during conflict and peacebuilding. It draws attention to the plight of more than 75 million 3-to-18-year-olds living in 35 crisis-affected countries that need urgent educational support.

In March 2021, Qatar and the UN signed multiple agreements to open new UN offices in Doha. A United Nations Development Programme (UNDP) office will be established as part of efforts to promote sustainable development goals at the global level, while the new UN Office for the Coordination of Humanitarian Affairs (OCHA) will support the UN mission of organising global humanitarian operations through partnerships with national and international actors.

In continued efforts by the State of Qatar to combat terrorism the Office of the United Nations Counter-Terrorism Programme on Parliamentary Participation in Preventing and Combating Terrorism (UNOCT) was officially inaugurated in Doha on 16 June 2021.

The UNOCT, a first-of-its-kind in the world, was set up between the Shura Council and the United Nations Office of Counter-Terrorism. The office aims to benefit parliaments around the world through its programmes and activities to support the international community’s efforts in preventing and combating terrorism.

Aware of the critical role of parliaments in preventing and combating terrorism, the office will undertake major initiatives within the framework of the United Nations Program and the Inter-Parliamentary Union, establish a global parliamentary network, create and maintain a web platform, and produce materials, publications and multimedia resources to support activities to prevent and combat terrorism.

The role of the Doha office will consists of undertaking joint initiatives to support the balanced implementation of the four pillars of the United Nations Global Counter-Terrorism Strategy. As well as undertake relevent Security Council resolutions in the field of combating terrorism and violent extremism leading to terrorism, conducting research and analysis, and carrying out work to support the prevention of and combating terrorism.The office will also enact new legislation around the world and help to formulate model parliament-led counter-terrorism legislation, policies and strategies.

A high-level delegation led by His Highness Sheikh Tamim bin Hamad Al Thani virtually participated in the 76th Session of the General Assembly of the United Nations in New York.

The State of Qatar, in line with its foreign policy, is a nation that is committed to the principles of international law and the United Nations Charter in contributing to security and stability.

In line with the main pillars set in the 2030 National Vision, the State of Qatar, through its efforts as both a key player and responsible citizen in regional and international development and cooperation, aims at resolving conflicts through dialogue and peaceful means. We are an open, outward looking nation that seeks to be a model of change for the region, with a bold and positive vision for the future that is fully aligned with the UN’s values.
The State of Qatar’s efforts are also directed towards total respect for the sovereignty of countries and the principles of good-neighbourliness as a means to create communities of stability, development and social justice. The State of Qatar believes that through trusted partnerships underpinned by international frameworks, we can contribute to security and stability in both the Arab region and beyond.